Due to the issue as to whether to retain Rev. R. Vijayakumar or not in Mylakkara Pastorate, the counselling for transfer of the Pastors scheduled to take place on 27.05.2019 and 28.05.2019 for the entire Trivandrum Synod did not take place.

The group that wanted to send out Rev. R. Vijayakumar, did not permit the counselling to proceed further on 27.05.2019.

On 28.05.2019, it was agreed that the next Transfer counselling in Trivandrum synod could be held on any one of the Mondays at the earliest after holding a secret ballot by the Administrator on the previous day, i.e. Sunday, in Mylakkara Pastorate to decide as to whether Rev.R.Vijayakumar could be retained or not.

You are aware that a joint meeting of both the groups in the IELC was held on 02.04.2019 at Chennai in the presence of the Administrator to decide on various issues including the transfer of Pastors. In the said meeting it was decided to transfer the Pastors who have served for more than 6 years by way of counselling.

Later, representations were received from many places that the Pastors who have crossed 60 years of age could either be transferred or retained in the concerned church as per the decision of the church members.

In Mylakkara Pastorate, there is no unanimous decision either to transfer or to retain Rev. R. Vijayakumar who is to retire in about one and half year.

Hence, it was decided to resolve by holding decision.

Further, there are other issues in Mylakkara Pastorate and I am willing to sort-out those issues by holding discussion with both the groups.

Hence, I will visit Mylakkara Pastorate on 16.06.2019 to discuss the issues with you and also with Rev. Vijayakumar and his supporters.

I request you not to interfere / prevent the Transfer Counselling that is scheduled to take place on 17.06.2019 for Trivandrum Synod, as the counselling in Ambur Synod and Nagercoil Synod were successfully conducted. “ 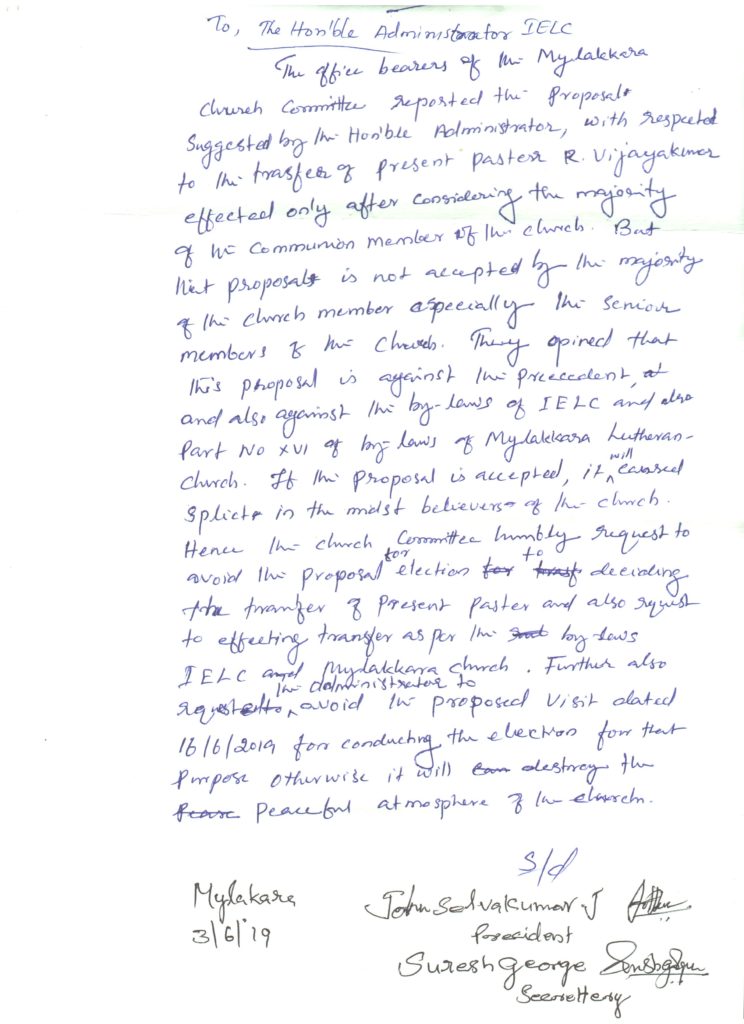